Private breeding farm in The Netherlands.

The donkey, Christopher Columbus, was the first Miniature Donkey born in North America on Columbus day 1929.

Robert Green and his grand nephew are pictured in the cart. This picture is from the early 1950’s.

Mr Green imported the first Miniature Donkeys into the United States in 1929 from Sicily and Sardinia Italy-Europe.

The Miniature Donkey is a distinct breed of donkey originating from the islands of Sardinia and Sicily off he coast of Italy (green colored islands on the old map of Italy down below).

They were bred to be small so they could be employed to turn grinding stones inside the peasant's houses. They were also used to carry water from village wells and supplies into the mountains for shepherds.

In 1929, a US stockbroker on Wall Street by the name of Robert Green imported 6 Jennies and a jack to his stud farm in New Jersey. He had heard about the wonderful little animals during a trip to Europe, and without even seeing the donkeys he purchased and arranged their shipping through an agent in Paris.

"Miniature Donkeys possess the affectionate nature of a Newfoundland, the resignation of a cow, the durability of a mule, the courage of a tiger, and the intellectual capability only slightly inferior to man's." 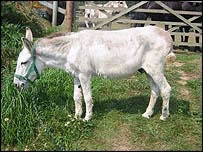 Fact: A contender for the oldest living donkey was Lively Laddie, born in 1943 , who worked Blackpool Pleasure Beach UK and on the islands Guernsey and Sark. 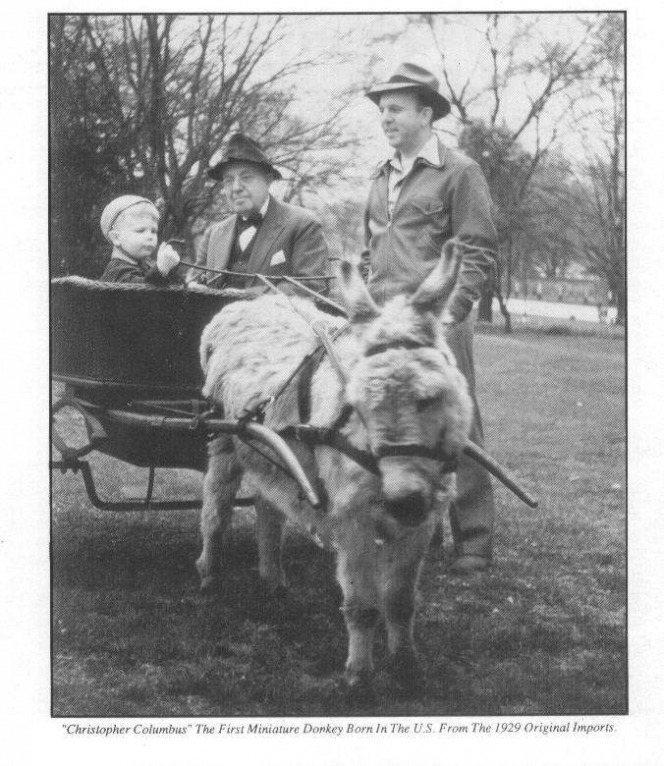 Legend of the cross

Legend goes: the little donkey that Christ rode on Palm Sunday was also present the day that Christ was crusiffied. He watched as Jesus struggled to carry the heavy cross and wished he could help Jesus by carrying the heavy burden for him. But that would not be allowed because Jesus was being punished and put to death for preaching the word of god.

The little donkey couln't stand the sight he was seeing so he turned away but remained at his station, at the foot of the cross, because he loved Jesus so and wanted to be near him.

In reward for his love and devotion, God let the shadow of the cross fall across the little donkey's back and that shadow was imprinted on the hair so it could be seen by everyone and all would know that even a humble little donkey can be rewarded for his love and devotion to Christ. That shadow of the cross was placed on all donkey's backs from that day forward.

Fantastic rechearch about  "ORIGIN OF THE MINIATURE DONKEY"   go to the